Since coming to the realisation that I want to work for a better world through economic policy making I have been researching in greater detail my main area policy interest, Universal Basic Income.

Some simple Googling led me to The Economic Security Project. This movement strikes directly at the heart of my policy preoccupations – how do we achieve economic security for all in the face of rising inequality and job automation? Their website says it best.

The Economic Security Project is a network committed to advancing the debate on unconditional cash and basic income in the United States. In a time of immense wealth, no one should live in poverty, nor should the middle class be consigned to a future of permanent stagnation or anxiety. Automation, globalization, and financialization are changing the nature of work, and these shifts require us to rethink how to create economic opportunity for all.

Now is the time to think seriously about how expanding unconditional cash could work, how to pay for it, and what the political path might be to make it a reality.

– The Economic Security Project: Who We Are

The figurehead piece of literature for this movement is the book Fair Shot: Rethinking Inequality and How We Earn by Chris Hughes, cofounder of the social networking site Facebook which is now valued at over US$500 billion.

Fair Shot describes Hughes’ perspective on growing inequality and the power of luck on the insane fortunes of entrepreneurs. The book challenges the current meritocratic narrative that success (on the scale of tech entrepreneurs) is directly attributable to the hard work of the average person.

Below are the elements of his work that I found the most striking and valuable.

Description of the neoliberalisation of various world economies from the 1980s onwards.

Hughes provides a high-level narration of the evolution of the US economy from President Nixon’s significant domestic spending and growth of government size through to the corporates and big businesses self-organising in the mid-1970s to lobby their interests. This lobbying resulted in the continued trend of reduced labour protections and reduced taxation on the investment income of the wealthy in the US.

Critically, Hughes states that these changes provided the foundation for three forces: rapid advances in new technologies, globalised trade and the rise of venture capital that made Facebook possible.

At this stage of my economic understanding, I always find it valuable to read up on the high-level changes that have occurred in the modern economy, in the US or otherwise.

Direct from a cofounder himself, Fair Shot informs us Facebook’s insane success was largely borne from launching during the “sweet spot” of the early days of the internet in 2004, that is, leveraging the first mover advantage that is difficult for latecomers to compete with.

“When Mark coded the first lines in the early days of 2004, only a third of people in the developed world were using the Internet at all. Today over 80 percent are, and Facebook was perfectly poised to capture nearly all of them. Like Google and Amazon, which had a few years’ head start on us, Facebook began operations in this sweet-spot in history when the size of the web was modest and quickly growing… We started Facebook just in time to ride the wave of the web’s explosive growth (Hughes 2018, p. 32).

The second element of Facebook’s success is the proliferation of internet-accessible devices, such as the Apple iPhone, that could be built cheaply by manufacturers in China with components sourced worldwide due to Washington’s lowering of tariffs and embrace of a globalised market the decade previous. Customers had a point of access to the Facebook product with the explosive growth of these devices.

The availability of unprecedented investment capital into risky early stage ideas by venture capitalists also grew during this time, thanks to high stock market prices and historically low tax rates. This level of capital was incredible fuel for growth.

Drawing back upon my undergrad studies in Strategic Management, Hughes clearly touches upon the fundamentals of business and entrepreneurship theory – that a successful business competes by exploiting its position in its industry, and that in true zero-sum-gain fashion, creates a high barrier of entry for its competitors. However, specifically within the context of the global economy at the time of Facebook’s launch – Hughes and his cofounders enjoyed a remarkable economic environment in which they achieved phenomenal growth and success.

I closely identify with the way that Hughes’ interest in basic income programs grew from his initial experiences with the traditional International Development model. Hughes, having greatly profited off Facebook, wanted to give back, and decided to focus on fighting extreme poverty internationally as his method to empower people to chase their dreams. However, having engaged with Jeffrey Sachs’ Millennium Villages program (which is now largely regarded as a failure), he rapidly became suspicious of the scale of impact of these kinds of interventions.

My experience working in International Development in Cambodia has led me to similar conclusions. I will refrain from going into great detail about the efficiency and effectiveness issues that Hughes’ witnessed, however I will highlight one particular quote that sums it up well. “Aid interventions can occasionally work, but the question is, at what cost”? He and I both are concerned about the efficiency of our dollars that we put into programming, and a simple question is posed. What if, instead of “experts” from abroad creating complex interventions in developing countries, we simply gave our target beneficiaries cash? It speaks volumes about the agency it would grant individual people to spend the money as they see fit to actually benefit their lives.

It’s interesting, and encouraging, to see Hughes’ train of thought and mine converging when it comes to the methodology for tackling poverty and inequality worldwide.

Hughes’ pragmatism when it comes to unconditional cash transfer initiatives

Fair Shot addresses the more detailed question of “how” to implement a basic income, which is a policy obsession of mine.

Hughes’ overall position is that a guaranteed basic income of, for example, $500 per month should be provided only to working people with an annual income of $50,000 or below. This amount should be paid by the ultra-rich, such as Chris Hughes himself. This design is modest compared to the universal basic income concept of paying a dividend to each and every single citizen, regardless of income or employment status.

His approach is more measured, as he believes that executing grand ideas too fast is unrealistic and sets up guaranteed income for failure. This is a lesson learned from his failure to make The New Republic, a liberal US politics and arts magazine, a financially successful venture. Hughes’ key takeaways from The New Republic experience: “In my work today I purposefully choose more modest means to accomplish otherwise idealistic and ambitious goals. …A prosaic and incremental approach can be a more effective way to put poetic ideals into practice” (2018, p.133).

Some examples of previous and current economic security pilot programs

The Alaska Permanent Fund is a current guaranteed income fund, albeit a small one. Every Alaskan gets approximately US$1,400 paid out of the fund. This initiative deposits a quarter of the annual royalties from the production of oil and gas in the resources rich Alaskan state and deposits it into a government-run savings account. The amount that is divvied out to each Alaska resident is not equivalent to the amount proposed by most guaranteed income schemes, but is exemplary of the kind of clockwork payment floor that can help Alaskans make ends meet.

The Negative Income Tax was the most popular design for how to create a guaranteed income for the better part of the 20th Century. The more that a person makes, the higher the income tax that they pay. At the same time, a tax allowance should also increase in proportion to the amount he falls further under the poverty line.

Most policymakers loved that it encouraged people to work, as it paid to work. They would earn more from employment and policy combined than just benefits alone. However, this form of guaranteed income did not pass the senate in 1971.

Out of this guaranteed income debate grew the Earned Income Tax Credit (EITC) which is an anti-poverty program that offers Americans a tax refund, depending on how much was earned in the previous financial year. Currently the EITC provides $70 billion in cash with no strings attached to 26 million working families and individuals, and recipients get $500-$6000 per year from the Internal Revenue Service to spend as they wish.

The City of Stockton, California is providing a small group of its citizens with a guaranteed income. The Economic Security Project provided the seed funding for this initiative!

“If you inherit a mansion, you should pay the same tax as you would if that mansion had been cash. Closing these loopholes would raise $34 billion (2018, p.165).”

“We should raise the tax rates on income above $250,000 back to the historical average for much of the twentieth century – 50 percent. A family making $300,000 a year would see their taxes go up by only a few thousand dollars, but a billionaire making $30 million would pay millions more each year. This change would raise $190 billion per year. These changes would pay for the entirety to the benefit without adding anything to the national debt (2018, p165).”

“The bumper-sticker promise would be simple: if you work to make your country better, your country will take care of you. Every American who lives in a household that makes less than $50,000 and who works in the formal economy, does caregiving at home, or who is enrolled in school would receive a guaranteed income of $500 a month. The wealthy won’t get the benefit, and only the richest of the rich will pay for it (2018, p166).”

“A surtax on the one percent isn’t pitchforks coming for the rich or punishment for prosperity (2018, p165).”

“We [Hughes’ guaranteed income skeptic father] both agree that people want to work, and that if you work, you should not live in poverty. He has come to understand how unstable jobs in America are becoming and the evidence behind cash transfers” (2018, p179).”

“The natural drift of capitalism toward inequality requires a constant vigilance to make the market work for everyone, not just for the rich. …The scarier, more dystopian possibility is an America that looks more like the old European civilizations, in which a wealthy gentry lord over the struggling masses (2018, p182).”

“When Martin Luther King Jr. began his fight for the guaranteed income in 1967, there were 40 million Americans living in poverty. Today, fifty years later, there are still 40 million Americans living in poverty and even more lower-middle-class people who are teetering on the brink of economic collapse. We have the power to change this. A guaranteed income of $500 a month, paid for by the one percent, would lift 20 million people out of poverty and give them a fair shot at economic independence (2018, p179).”

“I [Chris Hughes], got lucky. That the reason we are wealthy is not because of a gift of brilliance or decades of my own hard work, but because a new economy at the start of the twenty-first century created massive financial windfalls for a select few like us overnight (2018, p.184).”

Overall I found this book very accessible and personal to Hughes. It provides a very general and high level perspective of the economic forces driving the US today. This book was a great way to learn more about how guaranteed income is an ultra-relevant policy lever to improve lives using the obscene wealth generated by the 1 percent. Hughes’ writing has weight, because he was a cofounder of Facebook – so I find it encouraging that his experience and views on how to help people reach their full potential evolved in-line with mine! (Except for the part of being a multi-millionaire technologist of course!)

I definitely recommend giving this book a read, and I look forward to hearing your own thoughts on the matter! 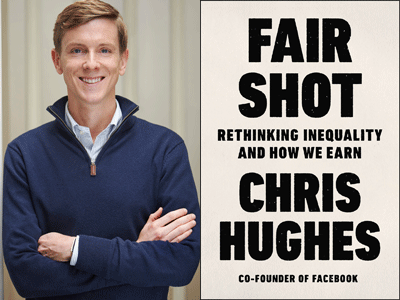 View all posts by jessicacychew