I am posting a long overdue blog submission on the heels of the 21st BIEN Congress that was held in Brisbane, Australia between 26-28 September. I was fortunate to be invited onto the local organising committee (LOC) made up of mostly Australian academics and other grassroots volunteers. We had been planning this hybrid BIEN for so long (since February 2022) that it’s just such a relief, but also very rewarding to be on the other side of the event now!

The three days went by in a blur, especially since I was on the LOC helping to chair sessions, facilitate Q&A and be a general all-rounder. This blog will give me a chance to capture my overall thoughts on the sessions I was able to attend and note the sessions I’d like to go back and watch when the recordings are released (programme reference here). 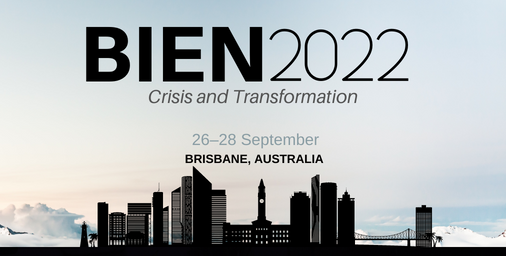 Keynote address: Kathi Weeks in conversation and Q&A with Elise Klein
What a great, articulate speaker. I won’t do it justice here on my blog, but she spoke on feminism and basic income, and really deconstructed and analysed the different institutions we belong to. What will stick in my mind is her analysis of domestic chores and child-rearing as “privatised reproductive labour”. I’m putting her 2011 book The Problem with Work: Feminism, Marxism, Antiwork Politics and Postwork Imaginaries onto my reading list.

Jane Scott – Disability Activist & Blogger
‘How a Universal Basic Income could allow people with a disability to thrive’
Jane spoke of the frustrating and conditional bureaucracy of negotiating the National Disability Insurance Scheme. What particularly struck me was her assertion that disabilities are a normal part of being human, which is utterly true but I had just never heard it phrased that way.  The key takeaways are that a UBI could allow people with disabilities to further engage with society and thus be more visible, as well as spend the funds at their discretion.

Dario Varcirca – Artist
‘Valuing creativity, criticality and care: the essential paradigm shift’
Dario’s provocation was that UBI would allow every person to become an artist. I think it’s an interesting frame that if we all had a UBI, we could all unleash our inner artist.

Abigail Boyd – Greens MP
‘Building Power to Dissolve Power: Building Political Paths to UBI’ panel session
It was very encouraging to learn of an MP putting forward a complete and costed UBI proposal in Australia called the ‘Universal Wellbeing Payment’. Her policy is something I’ll need to look into. https://universalwellbeingpayment.com.au

Maiy Azize – Deputy director of Anglicare Australia
‘Building Power to Dissolve Power: Building Political Paths to UBI’ panel session
I’ve admired Maiy for a while now since I first heard her speak at the Australian Basic Income Lab inaugural workshop in December 2021. Her organisation has conducted a lot of research into the limitations, failures and cruelties of the Australian welfare state as well as Australian public attitudes towards UBI. However, Maiy states the work ahead is not technical but rather the need to tell better stories to change the hearts and minds of the public. As a technocratic data analyst, I especially take heed of her words ‘technical discussion erases the human experience’.

Te Rangikaheke Kiripatea – Projects Manager at Kai Rotorua Inc
Panel session: ‘Indigenous Perspectives on Basic Income’
Te Rangikaheke’s talk was perhaps the most striking. From the perspective of a Maori man, he bluntly advised that when communicating UBI to Maoris that the speaker should be young, Maori, have a good standing in the Maori community, understand UBI well and most of all; keep it simple.

Janell Dymus – Māori Public Health Leadership COO
Panel session: ‘Indigenous Perspectives on Basic Income’
Janell shared a beautiful metaphor for describing the value of a UBI. She speaks of us all being on our personal mountaintops, each with differing heights that represent our varied and unique lived experiences and perspectives. A basic income allows every person to thrive no matter where they in life: on top of the mountain, in a valley or in the trenches.

Alina Plitman – Philosophy doctoral student
‘Create vs. Toil: A New Concept of Work’
Alina’s presentation was about the different ways we think about work. She presented a few conceptualisations on ‘work’ as labour or hard ‘toil’ vs the creation of a body of work (such as an oeuvre). I mostly took from this the difficulty of labelling different kinds of ‘work’ (waged work vs unpaid care work vs hobbies). Perhaps I should more simply think of ‘work’ as an activity, and then I need to rest from that activity (even if it’s my hobby).

Jim Mulvale – Sociology professor
‘Is the Labour Movement Getting Onside with Basic Income? Views from Canada’
How the labour movement interacts/perceives UBI is a contentious space, with the labour union being primarily concerned with preserving the primacy of work and preferring job guarantee policy interventions. Jim provides a good summary of the research findings on Canadian unions’ views on UBI.

Considerations for UBI proponents when discussing with labour unions

Ibrahim Kuran and Sercan Pekel – Researchers
‘Public Opinion Towards Basic Income: Analysis of Twitter data (with the #BasicIncome Hashtag)’
Ibrahim and Sercan’s presentation concerning big data analytics was very close to my heart. Their research compliments existing survey data on attitudes towards basic income. I’ll have to check out their techniques when they share their code on git.

Michael Haines – Vanzi CEO Social and Economic Innovator
‘UBI: Without Extra Tax, Debt or Inflation, or Taking from Other Programs’
Through my volunteering with Basic Income Australia, I am familiar with Michael’s proposal to use sovereign money to fund a basic income. I look forward to following how this policy proposal progresses since its debut at this BIEN Congress.

Overall takeaways
BIEN 2022 was a huge leap forward for me in terms of my understanding of universal basic income and how I would like to contribute to its implementation in Australia. I walked away with two distinct impressions:

I still have some recordings to catch up on when they are released that mostly pertain to the various UBI modelling topics that I’m greatly looking forward to.

Now that Australia’s turn hosting the congress is complete, I look forward to hopefully making it to South Korea for BIEN 2023!

View all posts by jessicacychew